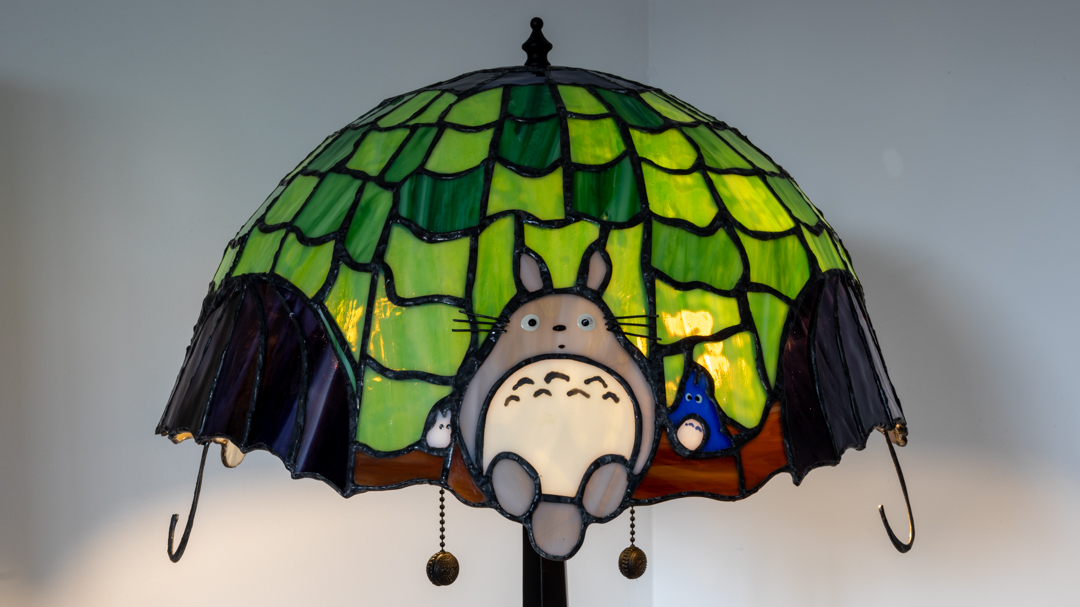 As many of you know, I love making special commissions in stained glass for birthdays and other events. One of the best requests recently was to make a unique lamp for a fan of the animated character, Totoro.

Totoro has become something of a cult classic since he was featured in the Japanese animated film, My Neighbor Totoro, back in 1988. He is a large, furry, fantasy creature with rabbit-like features. In the story, he and his much smaller woodland spirit friends help two little girls on their adventures.

The Totoro lamp was to feature Totoro and his spirit friends against a woodland background. I suggested the addition of dark purple umbrellas, too, as the umbrella is part of the story.

The glass colours were chosen to be as close as possible to those of the original characters – namely, grey, blue and white. Several different green glasses were used for the texture of the forest. These included a green ‘ring mottle’ stained glass, which has uneven, circular contrasts when lit. A very dark purple was selected for the three large umbrellas.

The green glass was cut in wavy lines to suggest the leaves and foliage of the wood. The Totoro’s facial features and pattern were painted on in glass paint. The umbrellas were embellished with wire for the spokes and handles were made from wire that was soldered on top to give a smooth surface. Purple glass was added at the top to suggest another umbrella and tie the design together. There were three Totoros and three big umbrellas alternating around the bottom edge of the shade, with the Totoros sitting on wooden branches created from brown glass.

If you get a chance to watch ‘My Neighbor Totoro’, maybe you will also be captivated by this charming film. I particularly liked the little black dust sprites, who inhabit the house at the start of the story.

I hope this unique stained glass Totoro lamp embodies the spirit of the film for its new owner. He is a very lucky Totoro fan!

When you have a beautiful stained glass window in your home it is upsetting if it gets damaged. This was the case for this front door with a large stained glass panel. The owner had painted the door...

END_OF_DOCUMENT_TOKEN_TO_BE_REPLACED 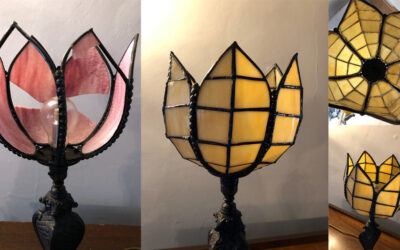 As many of you know, I am often asked to repair broken Tiffany lamps. Sometimes there is damage where the vase cap has come apart from the glass shade. Sometimes the individual stained glass pieces...

END_OF_DOCUMENT_TOKEN_TO_BE_REPLACED 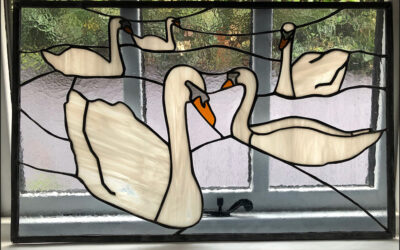 There is no better validation for an artist than repeat business. I am honoured to have several loyal customers who buy my stained glass pieces, big and small. The customers who ordered a seagulls...