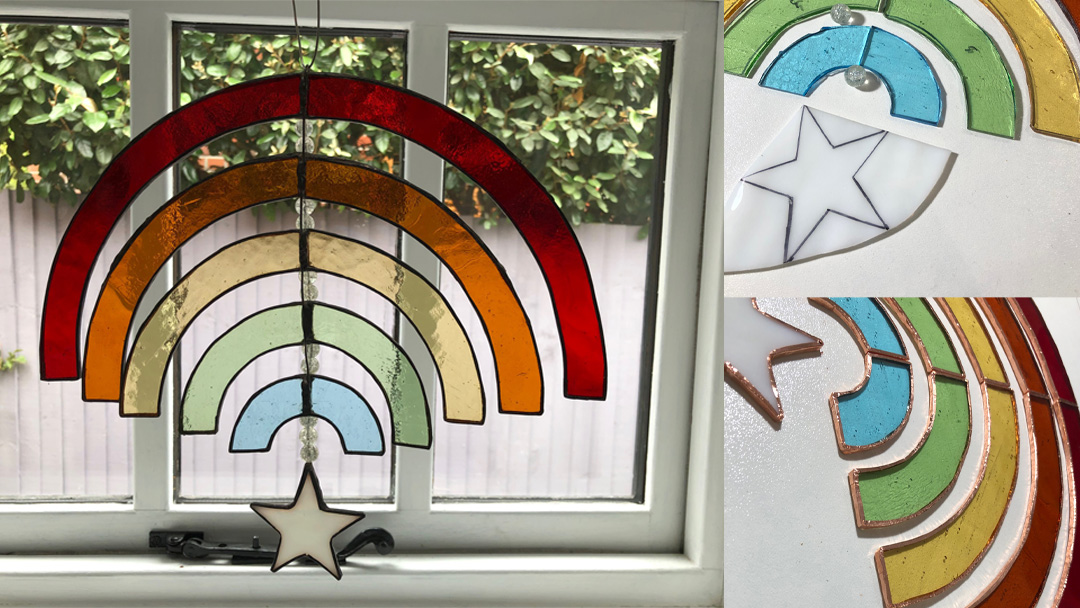 I am excited to announce that my stained glass rainbow has achieved international TV stardom. It is currently appearing in the new children’s TV series ‘Lovely Little Farm’, currently showing on Apple TV+.

If you have young children or grandchildren, have a look at this series, which is about the adventures of a family living in a farmhouse on a small farm. The main characters are a girl called Jill and her younger sister Jacky. They look after a variety of farm animals, both real and animated.

The Lovely Little Farm series comes from great children’s TV stock, being co-created by Billy Macqueen and Maddy Darrall, who were executive producers on the famous ‘Teletubbies’ series.

I was approached by a member of the Lovely Little Farm team back in 2020 as she had seen and loved my stained glass designs. She explained a bit about the series in general terms (although the details were kept secret until the series launch in June 2022). She was keen to have a stained glass rainbow with a heart suspended from it. This would fit with the positive image of the series as rainbows are always a symbol of hope.

It has to be said that the family in the series have a homely, but somewhat cluttered, farmhouse. However, if you go to minute 23 of Series 1, Episode 1, you will spot the rainbow above the head of the father as he talks to his daughters in Jill’s bedroom. Fame at last! 🙂

Lovely Little Farm is a warm and gentle series for children that blends a magical, farm life with puppet animals and talking ducklings. What’s not to like? You can catch up with the whole series now on Apple TV+.

Once again, I am pleased to say that I am taking part in Hampshire Open Studios 2022. Each August,...

A challenging project came in recently. I was asked to repair a stained glass lampshade with...

I am excited to announce that my stained glass rainbow has achieved international TV stardom. It...

As you may remember, from 30 June into early July 2022 I exhibited my stained glass designs at the...

So many people are still asking me to help them with Tiffany-style lamp repairs. Every month I...

When you have a small amount of damaged stained glass it is best if you can have it repaired in...