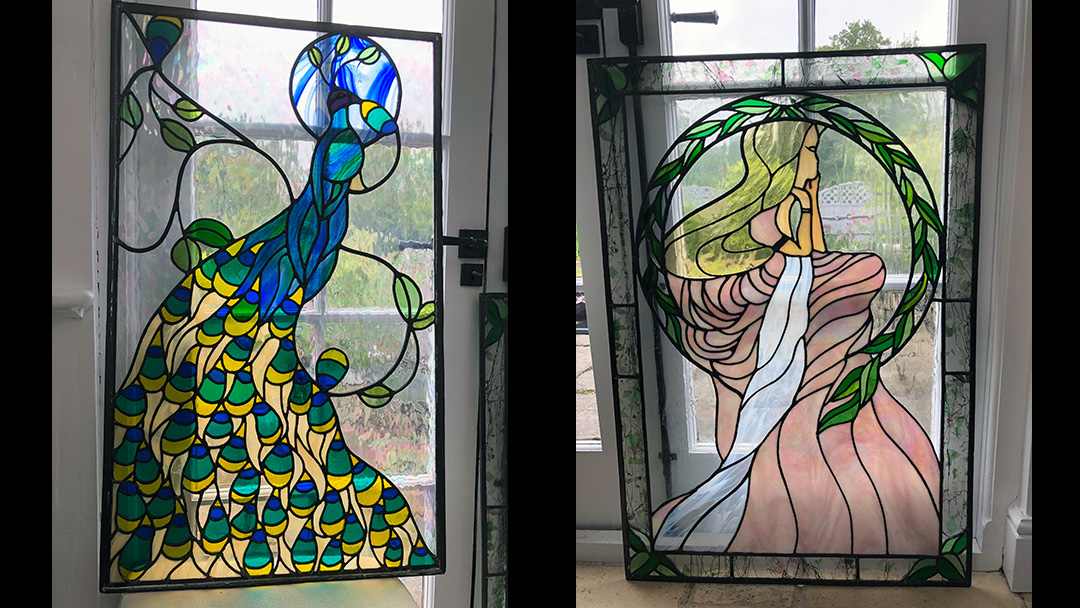 These two detailed and decorative stained glass panels came for repair from a client’s parents’ home. They had been framed in internal doors. Unfortunately, both had sustained damage. One had been knocked and bowed near the bottom, causing several pieces to break. The other had lost a large piece of glass, other pieces were broken, and it had also bowed. Both needed replacement filler in some areas, too.

The customer wanted these stained glass windows repaired so that he could repurpose them into backlit wall art pieces.

The client had been advised by someone that he needed a Tiffany technique expert to carry out the repairs. However, when I examined the panels it was clear that they had not been made with Tiffany technique copper foil, but with very narrow lead. This narrow lead was part of the problem, as it was not sufficiently wide to support the glass well in large and heavy panels.

The first job on the panel featuring the lady was to flatten the glass carefully. One piece of white wispy glass was missing and another had a crack and had to be replaced. The missing piece of stained glass had been retained but it was not possible to fit it back in the flimsy, thin lead. I took the decision to use copper foil technique. This would blend in with the existing leads and be more robust, too. Steel strip was added to strengthen it further.

The broken pieces of the peacock design stained glass panel were removed and new, complementary stained glass pieces were cut. In this case I was able to fit the glass into the existing leads. Filler was used on both sides to keep the new glass in place. I also checked over both stained glass windows and filled missing areas.

During cleaning, I discovered each panel had etched initials and the date 2000. It seemed fitting that they would be starting a new life in a new home in their 21st year.

It is always satisfying to save old stained glass through repair and refurbishment. So much beautiful stained glass is discarded when it could be recovered and enjoyed for many more years.

Adding a stained glass window - or windows - to your home not only brings the joy of light and...

Do you have an old or damaged Tiffany lamp that you would like repaired or refurbished? Many...

There are so many types of stained glass available today, which make it great for different...

Having finished my 'in person' events for 2021, I have been making a few new stained glass pieces...

One of the best parts of the job of being a stained glass artist is the unexpected requests that...