Home / Blog / A great gift for a Star Wars fan

A great gift for a Star Wars fan 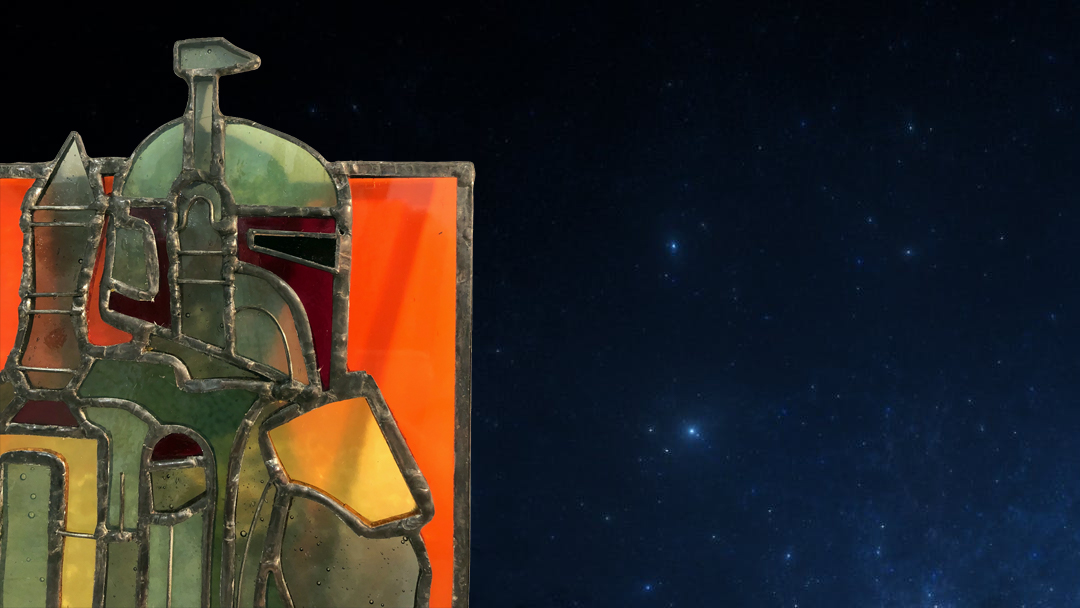 If your Star Wars fan ‘man who has everything’ has a significant birthday, what present can you get him? One option is to commission a Star Wars inspired stained glass panel.

The Star Wars fan in question is a particular fan of the mercenary character Boba Fett. Boba Fett famously captured Han Solo in the film The Empire Strikes Back (1980) and encased him in carbonite to transport him to collect his reward.

Boba Fett is noted for the fact that he never removes his iconic, green helmet, and his armour bears the scars of his many adventures as a bounty hunter. He is known for saying very little, so his visual appearance is important in defining him.

I wanted to achieve quite a lot of detail in the Boba Fett-inspired stained glass panel I had planned, but I made it fairly small so it could be stood in a window or hung on a wall.

It was important to get the correct tones of green for the helmet and cape when recreating this well-known character. In the end I used fusing glass to get the right effect, combined with regular stained glass for the other parts of the design.

The external targeting rangefinder was a significant detail that had to be included (the bit that stands up), as was the rocket pack carried on his back. As he is enigmatic, I decided to depict him from behind to maintain his air of mystery.

As usual, I cut the glass to a pattern I made, ground off the rough edges and then added copper foil around each piece of stained glass. I then soldered all the pieces together on both sides. I chose a rich, orange for the background glass for two reasons: one, it is a favourite colour of the recipient, and two, it suggests the glow of a sun from another galaxy.

Thicker foil was added around the outside edges, to frame the piece, and wire details were added to the Boba Fett character to enhance his legendary armour.

This was a fun piece to make and certainly answered the question, “What do you get for the Star Wars fan who has everything?” Yes, a handmade stained glass panel of bounty hunter Boba Fett!

If you are a Star Wars – and Boba Fett – fan, look out for the upcoming ‘The Mandalorian’ tv series spinoff, ‘The Book of Boba Fett’, which is set to air in December 2021. 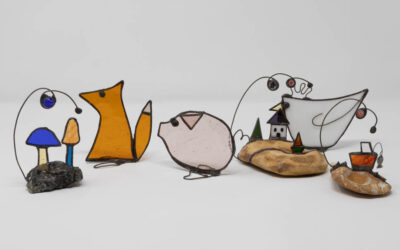 It's time to revisit (or visit!) the Shop section of the website! There are lots of new, small stained glass pieces to choose from. These include new funky sculptures of animals, like a stained...

END_OF_DOCUMENT_TOKEN_TO_BE_REPLACED 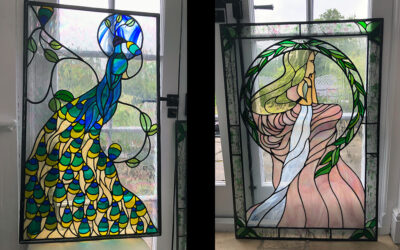 These two detailed and decorative stained glass panels came for repair from a client's parents' home. They had been framed in internal doors. Unfortunately, both had sustained damage. One had been...

END_OF_DOCUMENT_TOKEN_TO_BE_REPLACED 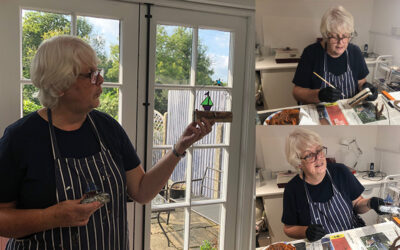 It has taken many years for me to get round to it... but I have finally hosted my first stained glass class! A lovely lady contacted me after seeing my work at an exhibition. She had had some...